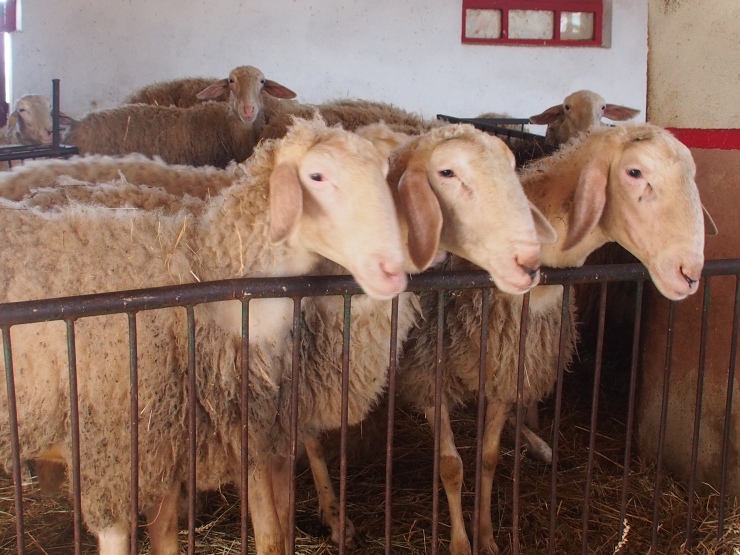 Cortona is known for its pecorino cheese and after today’s experience I’ll never think of it the same! Except for milking the sheep we Foodies dived into the whole process of making it.

Under the watchful eyes of Lapo and his daughter Ilaria, we were going to learn the traditional process.

There was no escaping Lapo who first linked arms to ready us for the plunge. Don’t be deceived by this smiling face. Having noticed this tub of liquid, I was a little worried about what was to happen next.

It didn’t take long to find out. I was up to my elbows in warm liquid with something spongy under my hands and instructed not to squeeze but to lay hands gently on the top of the blob that was forming. Minutes later Lapo pulls a chunk of something out of the liquid for taste testing. There was no resisting as both my hands were still immersed.

Finally, this part of the process was complete and Ilaria with help removed a big blob that had miraculously formed.

Next, each of us received a healthy chunk pressed into a plastic container. 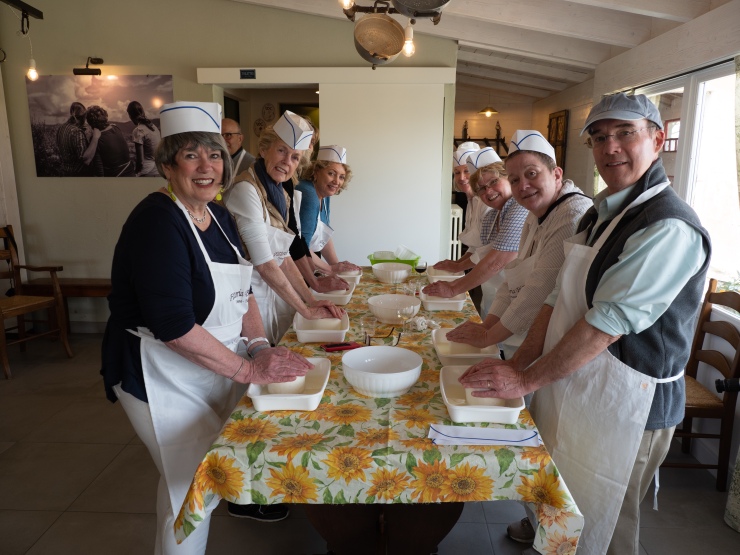 Then, we proceeded to mash and mash and mash some more until no liquid seeped from the container. During this phase the liquid was poured off to be used for making ricotta. Nothing goes to waste here!

Finally, we were done. Salt was sprinkled on the top of the cheese and it was arranged in a tray where it would cure for two months.

At this point I’m thinking having visitors make rounds of cheese that would lead to a finished product was a pretty tricky way of getting unpaid labor. Ah, but Lapo is clever because he had each of us Foodies etch an initial on our cheese and when it was mature we could have it sent to the U.S. for only 20 euros plus shipping. How do you like that for marketing? Combined with the wine we purchased in Spello, the group can have one heck of a wine and cheese party when it all arrives!

Experiences like this and the reward that follows are what make a Foodie Adventure so much fun. There is always something unexpected that results in laughter accompanying a shared experience. That is the stuff of memories.