With many harrowing hours on the bus behind us, we arrived at our final destination, Udaipur said to be the Venice of the East. The bus had to traverse a very narrow street not wide enough for two smaller vehicles much less a big one so our entry was rather dramatic in that we had cars, bicycles and motorbikes backed up in every direction. Talk about some horn honking! 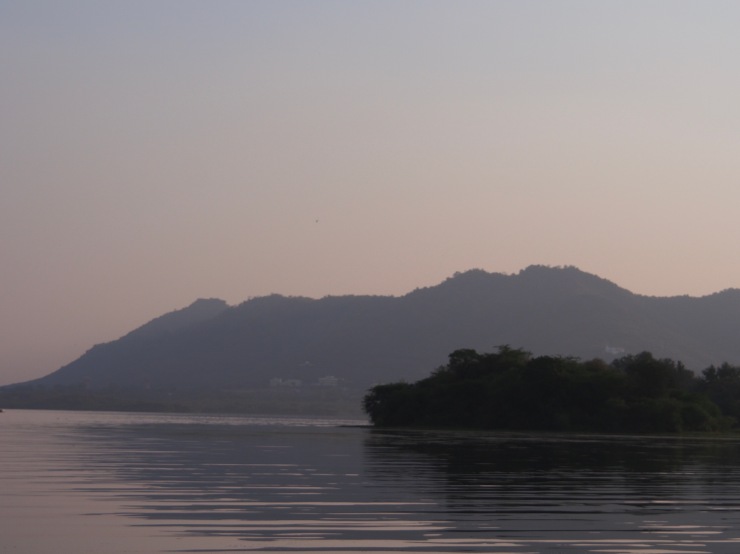 As we navigated our way through traffic, I noticed something very different about Udaipur. It was clean, the sky was clear, there was more green and in the distance could be seen mountains and water meaning we had left the desert behind. 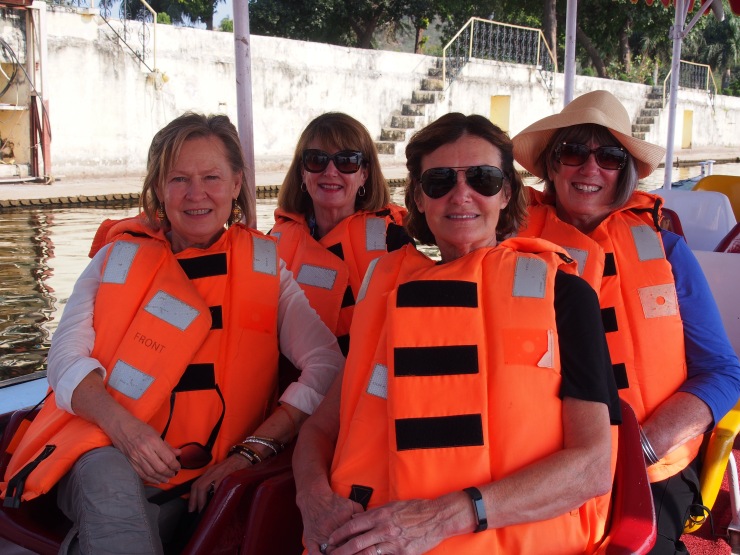 After a nerve wracking ride, we left the bus to board a boat that would take us to our hotel, the Leela Palace. 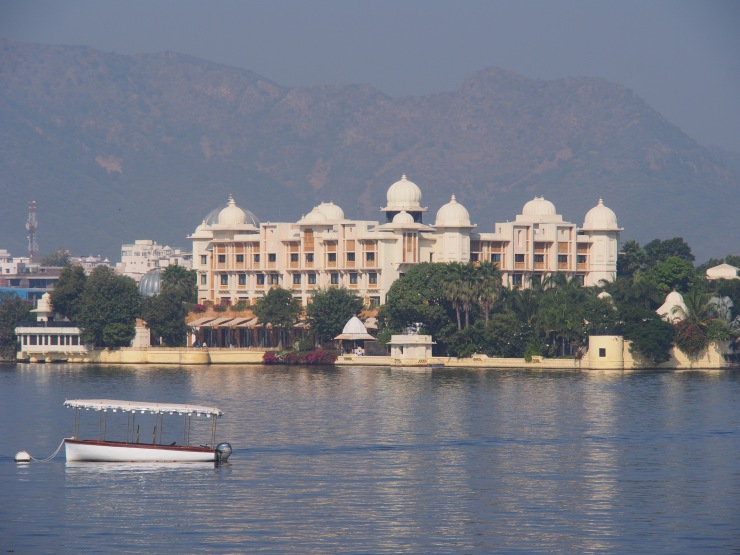 Seeing it in the distance made my heart beat a little faster as it appeared we had saved the best for last.

And so it was. Rooms were sumptuous with a comfortable sitting area 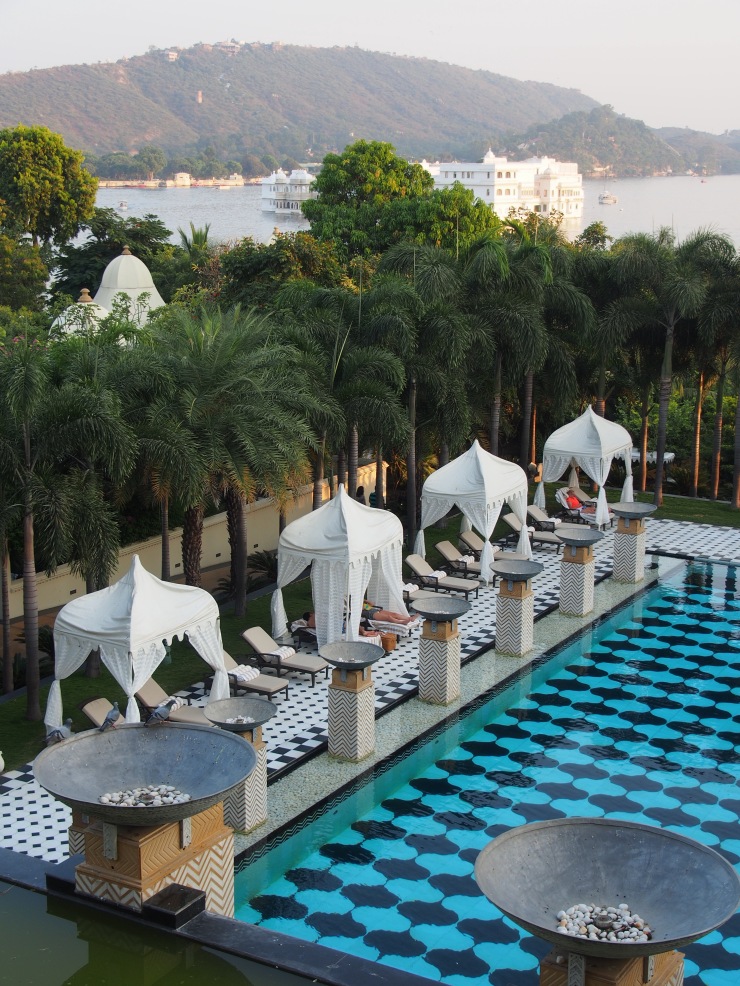 and inviting views in every direction. 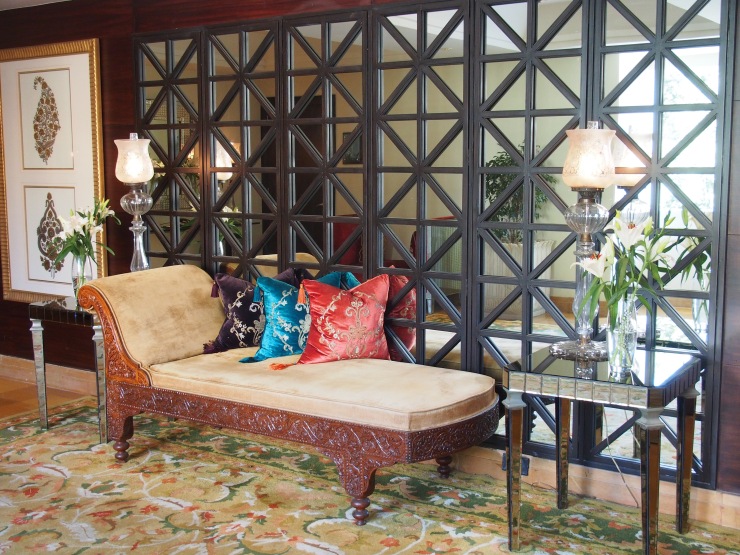 At every turn, the hotel was beautifully appointed making me want to stay there for days. It would take days just to learn one’s way around! 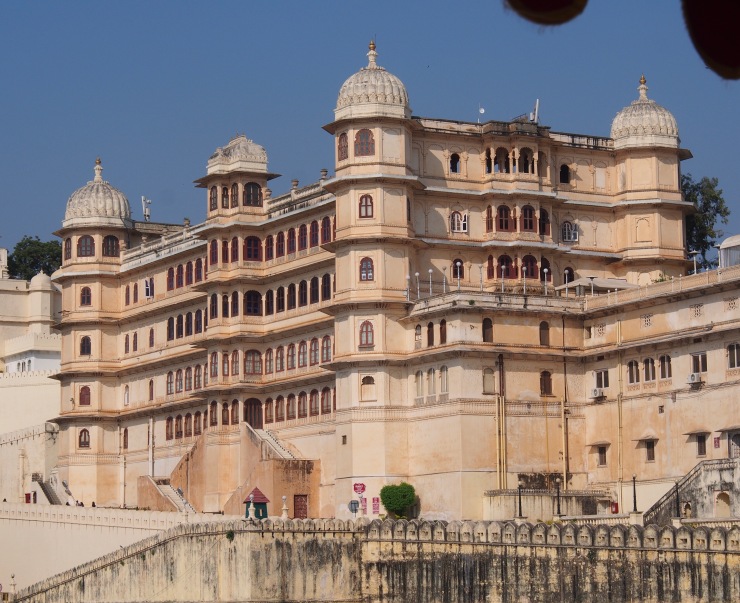 As much as I hated to leave the hotel, there were sights to see. Again by boat, we headed toward the City Palace, an enormous complex dominating Pichola Lake. 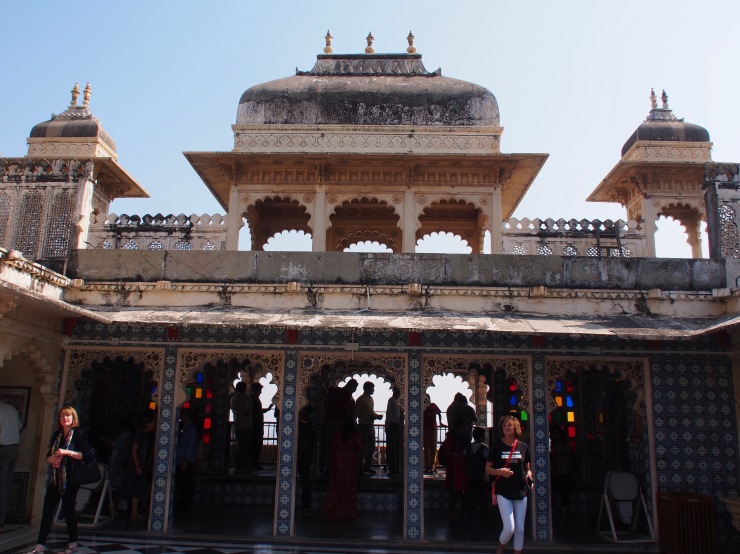 It is impossible to describe the majesty of this place with its graceful arches and stained Venetian glass, 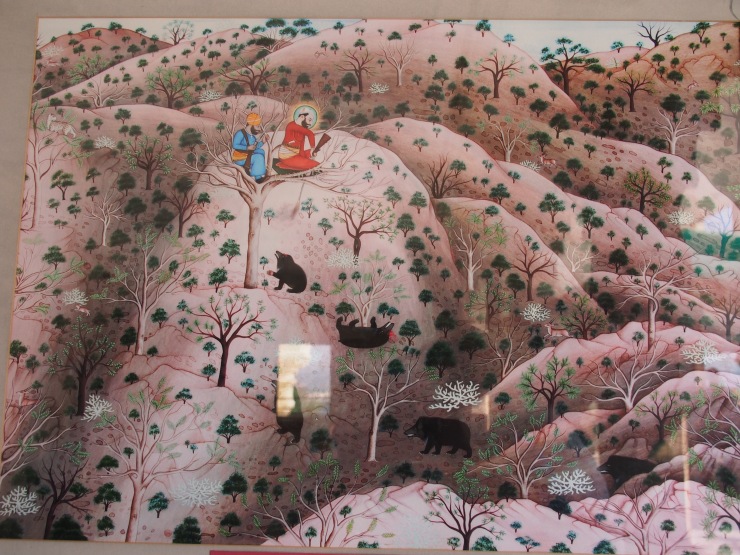 its stunning works of art done with exacting detail 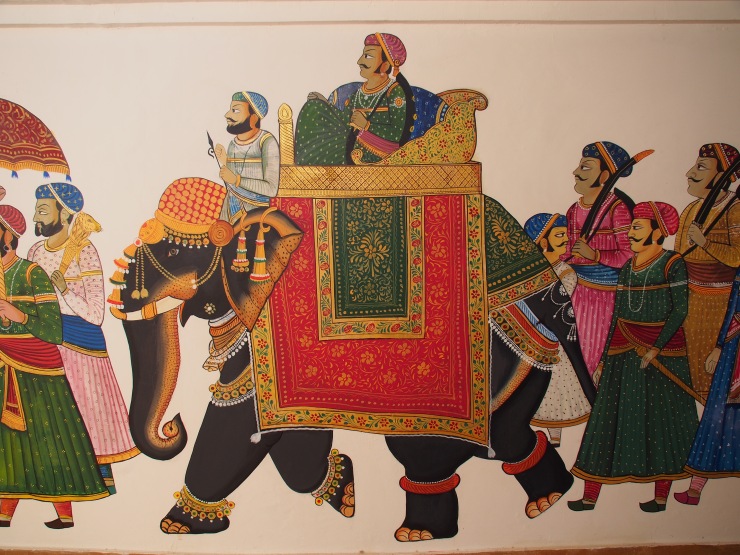 and breathtaking painted surfaces telling the story of the culture that had existed there. Photographs don’t begin to do the City Palace justice. 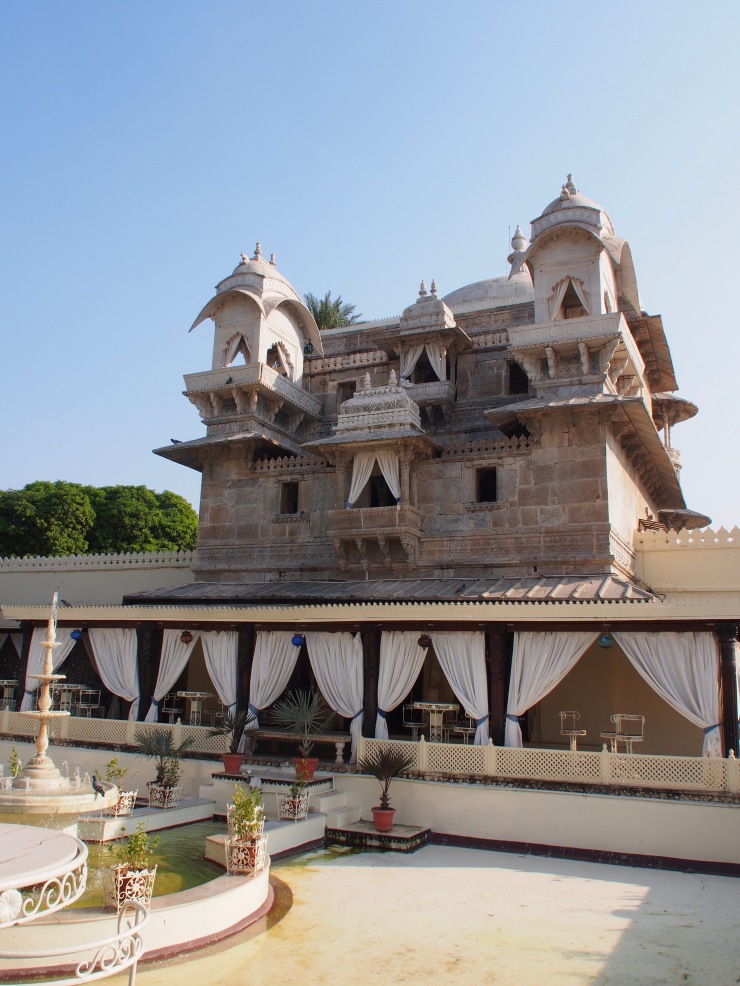 Across the way and again accessible only by boat is the Jag Mandir Palace which was used as a summer place by the royal family. Today it is a hotel and a popular site for weddings and other social events. 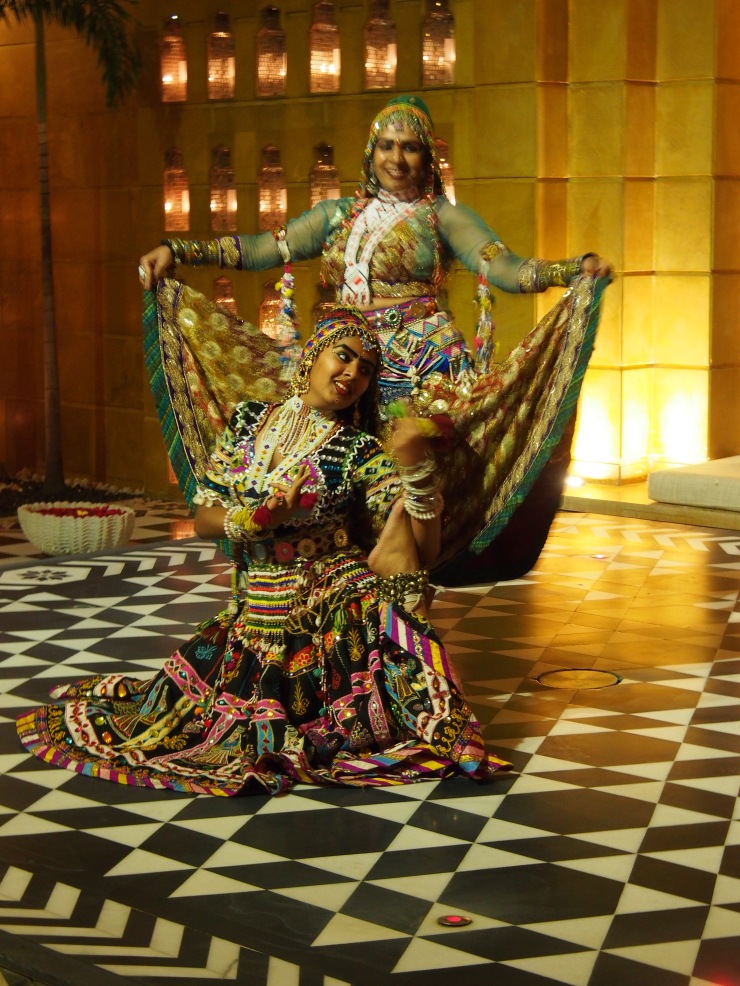 Having had our fill of sightseeing, we returned to the hotel for a wonderful evening of shared friendship, good food and entertainment. 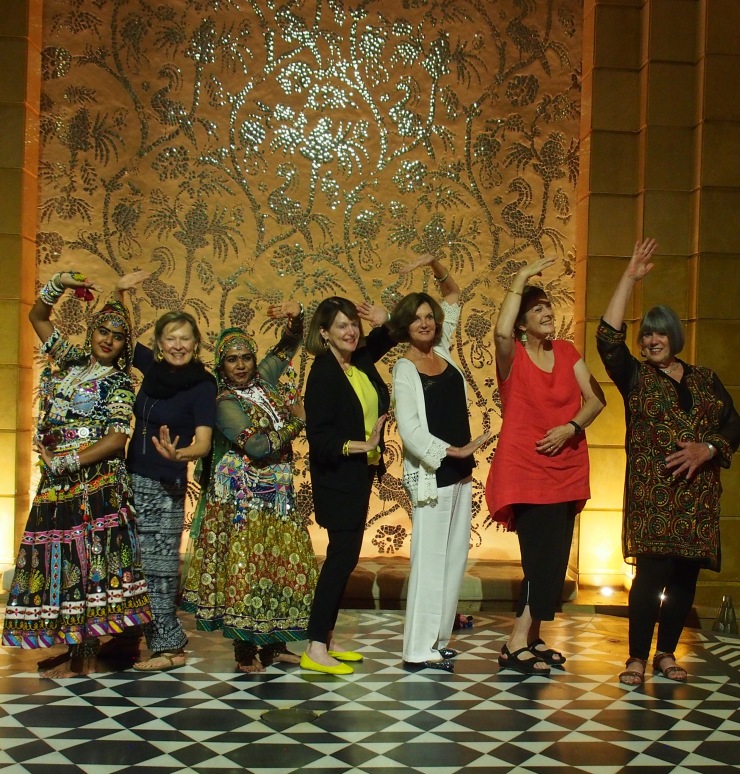 Some of us even got into the act though we were not nearly as glamorous or graceful as the beautiful performers. 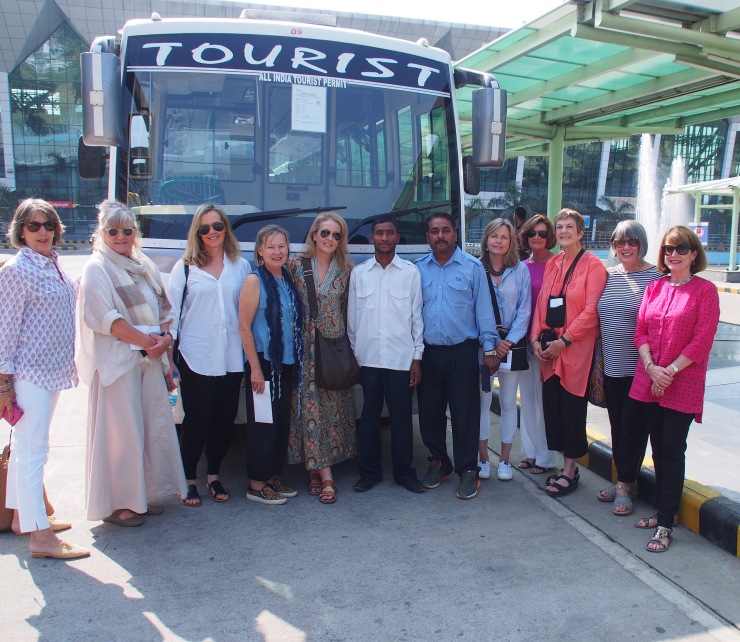 All too soon our stay was over and once again we boarded the bus for the airport and flights that would return us home. For each of us the experience was different, but there is no question that every one of us has memories indelibly inscribed in our heart. That is the gift of travel.