No doubt early weavers had no tools other than their hands with which to work, but I bet it wasn’t long before they figured something out that would allow them to be more efficient. 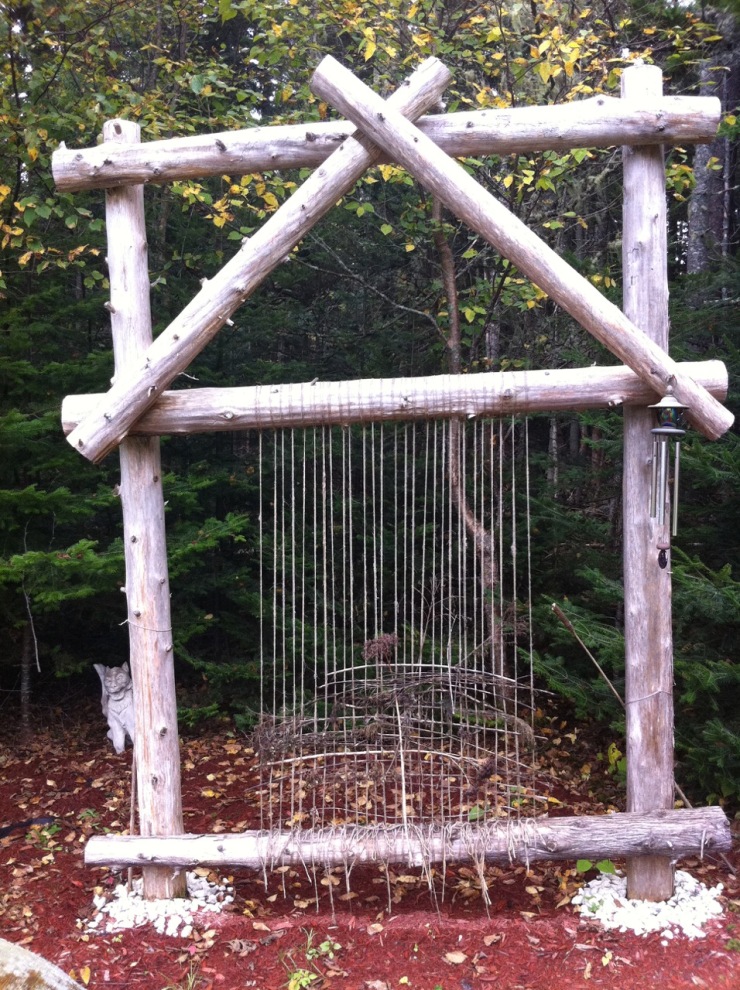 Perhaps it was something as uncomplicated as a frame loom that allowed warp, vertical threads, to be attached. The skills may have been more advanced, but something very similar to this was used to weave those beautiful tapestries that were mentioned in the last post. 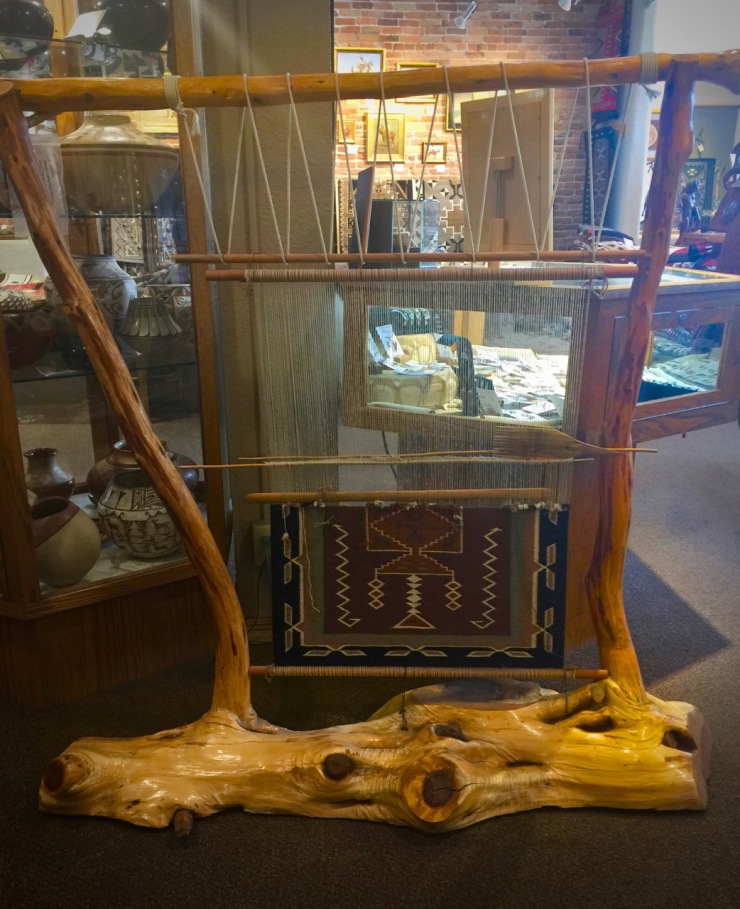 The same construction for what we call upright looms continues in use today. In this country, they are often associated with Native American weavers who create stunning blankets and rugs.  Incidentally, this concept influenced the construction of my first loom which the hubby made of 1″ pipe and notched 2×2’s. 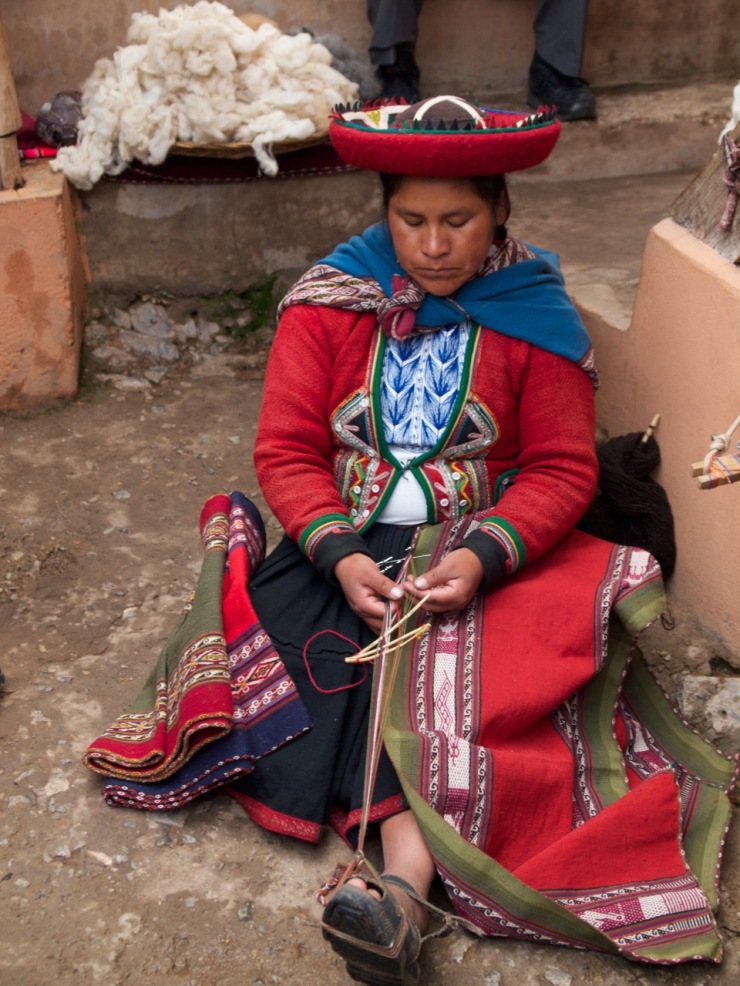 Sometimes the body serves as a loom.  Here the warp threads are held in place by the foot, and the weft (horizontal threads) is manipulated with the fingers to create intricate design. 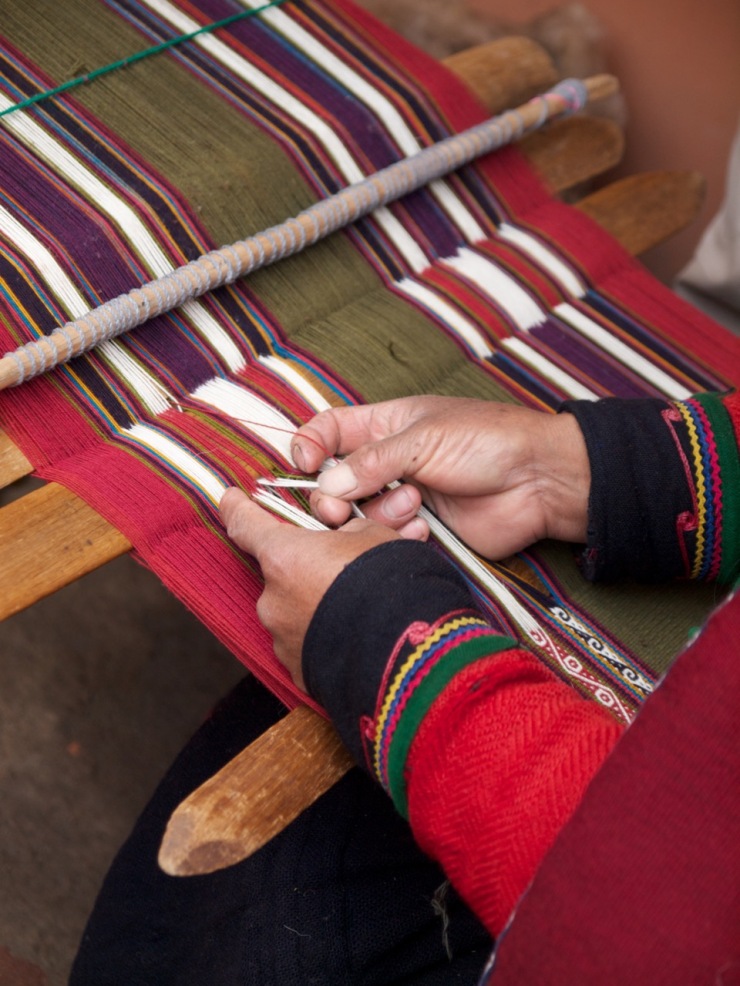 In other cases, the warp is tied at one end to a dowel  or stick and secured at the waist to keep the threads taut. To create design, the warp threads are lifted and lowered with the fingers and small shuttles carry the weft threads across.  Who knows how far back such techniques go?  What is fascinating is that with all the changes that have made weaving simpler, some cultures continue ages old process. 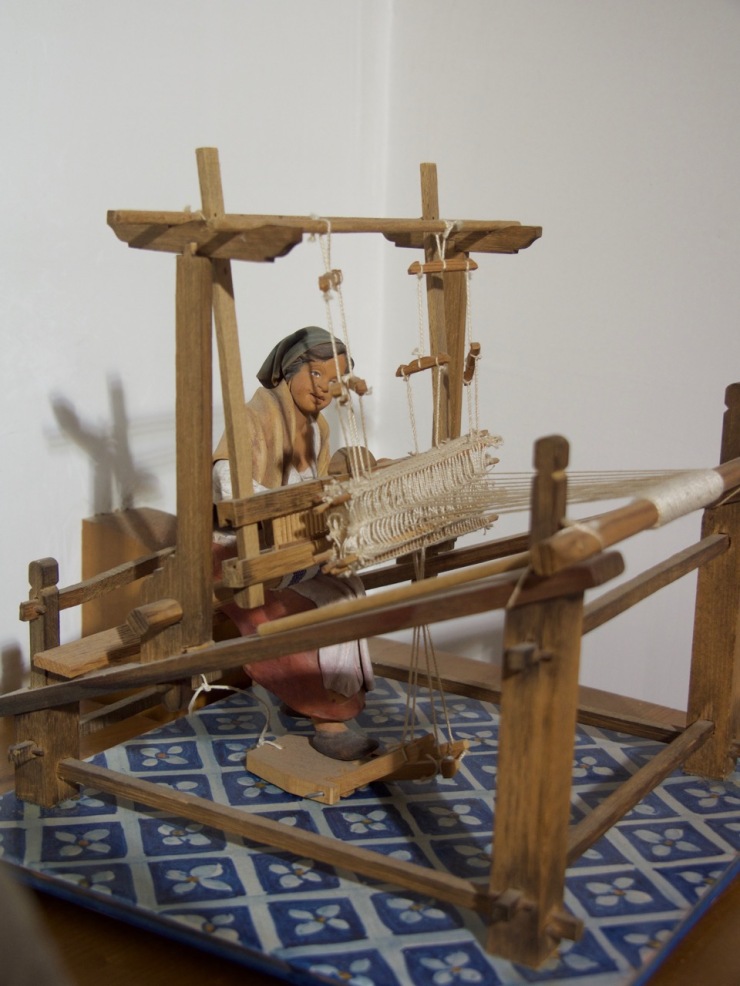 By the 12th century, much of what we know about weaving, including the introduction of a floor loom, had evolved.  Floor looms allowed the weaver to sit on a bench and operate pedals with the feet.  Keep in mind that weaving is the interlacing of warp and weft threads and at least two separate warp threads are required. In this photo you can see that one set of threads stays down while the other is lifted up.  Weft threads run between the two and, in its simplest form, that is how all threads are laced together to become fabric. 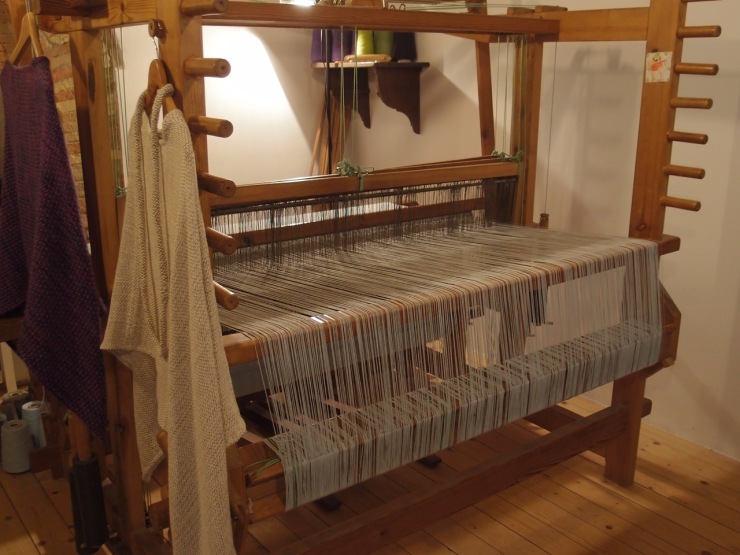 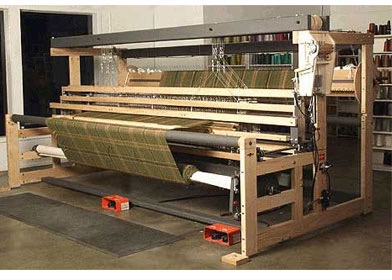 During the Industrial Revolution came the most significant change.  The jacquard loom with flying shuttles was introduced thus starting the highly mechanized production of textiles in place today. 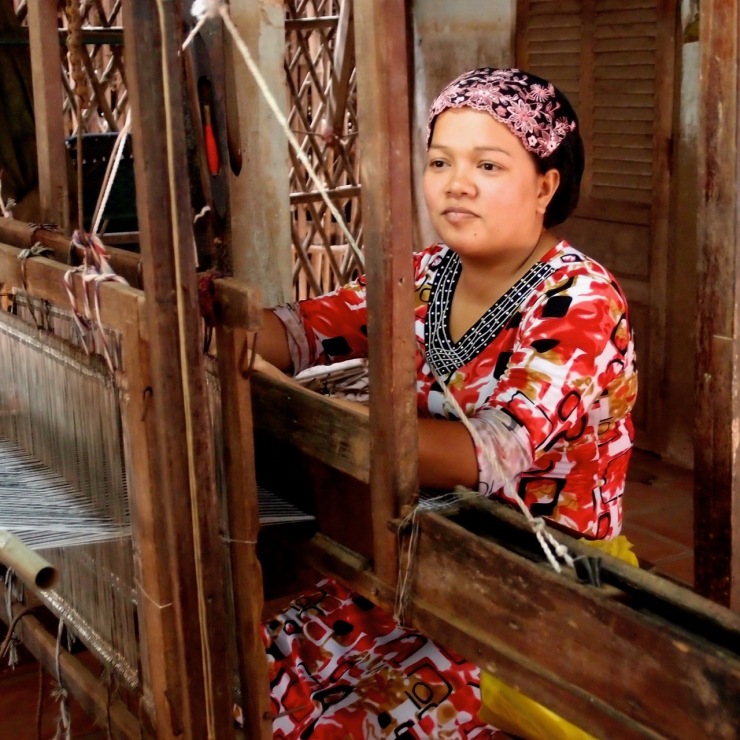 While many people think handweaving is women’s work, 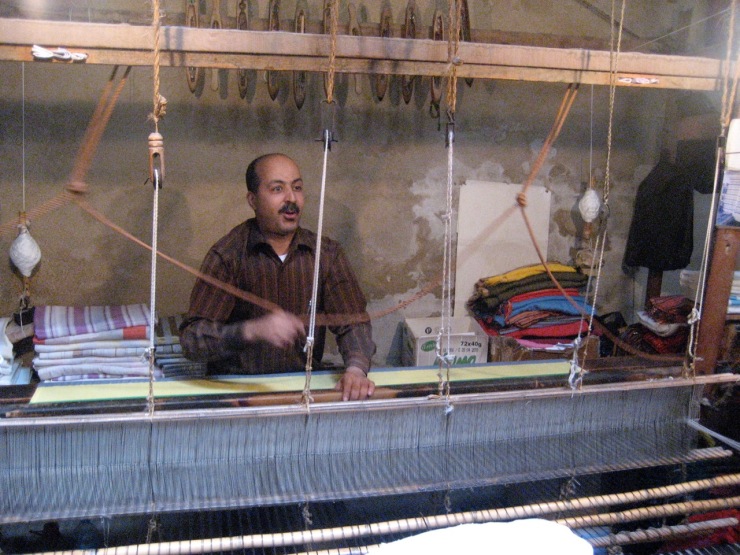 in some countries it is man’s work, too.  I like seeing men have a sensitivity to threads and a sense of pride in making beautiful fabric. 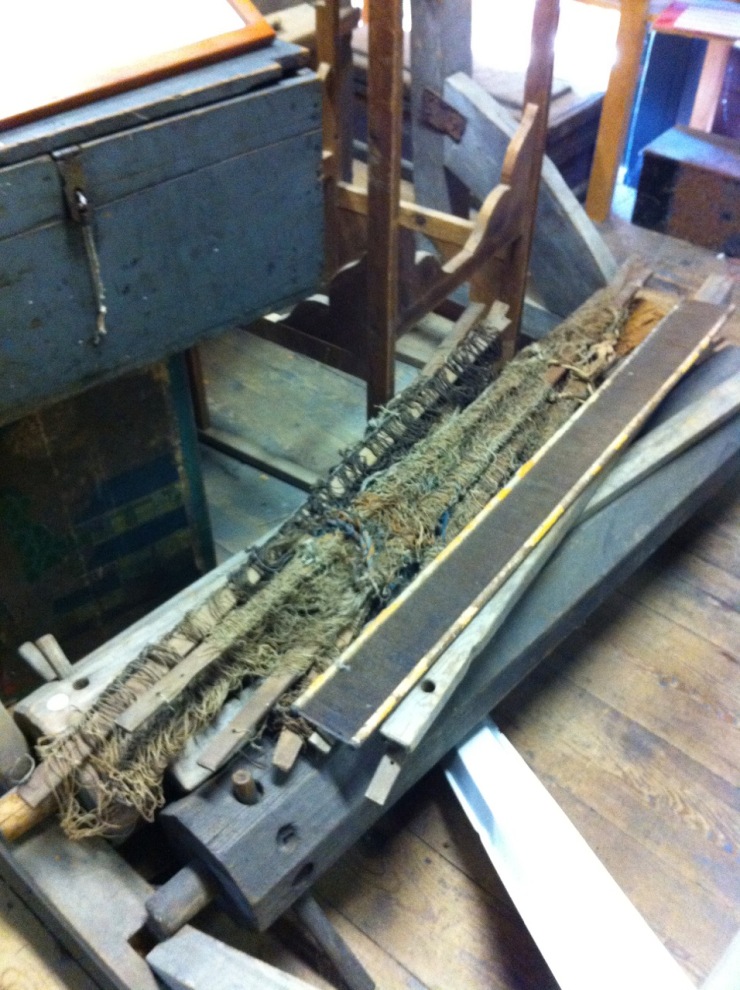 Yes, over the centuries weaving has changed, and the people who weave by hand are becoming fewer and fewer.  Whenever I see the remains of an old loom I find myself wondering at its history and wish it could tell me the story of the person who once worked on it.

Now that you have some insight into the history of weaving and the apparatus that make it possible, next up is a visit to my studio.  I hope you all join me there.

16 thoughts on “Warped to Weave”