A short cruise from Newburyport is Gloucester (pronounced, I’m told, Gloster) on the Annisquam River.  As we went up the river, it struck me as a place where many people spend time in the summer.  The marsh grass shore was lined with what looked to be second homes

and along both sides of the river there was plenty of activity in and on the water.

Birds were nonplussed by all the human goings on and found the rocks a good place to take them all in.

Arriving at the Cape Ann Marina, it didn’t take more than a glance to see that Gloucester is about fishing as we were surrounded by commercial boats. 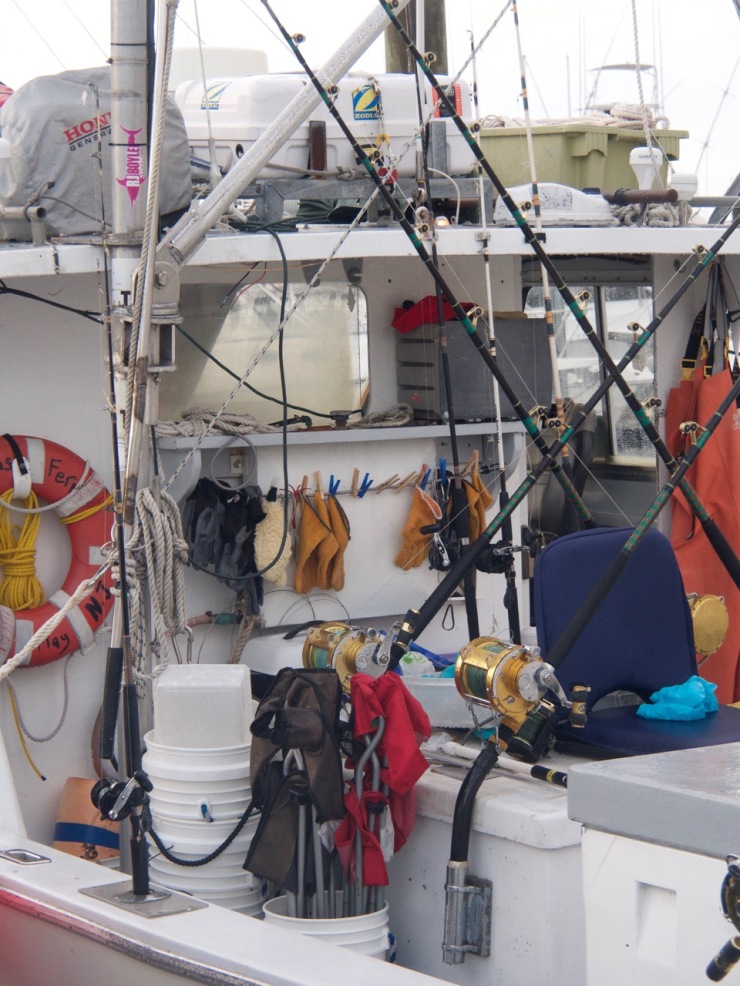 I’ve never seen so much paraphernalia nor reels so big.  I couldn’t wait to ask questions to learn what giant sized fish required such big gear.

The answer: tuna, and the guy who owned this boat shows off a trophy for having caught one weighing more than 500 pounds.  He said that gives him bragging rights for a year!

Perhaps the most famous landmark in Gloucester is a sculpture commemorating men and women lost at sea.  Unfortunately, I couldn’t get a photo of the real thing, but it and Gloucester’s story is depicted in this mural.  Looking at this, I couldn’t help but think of the movie The Perfect Storm. 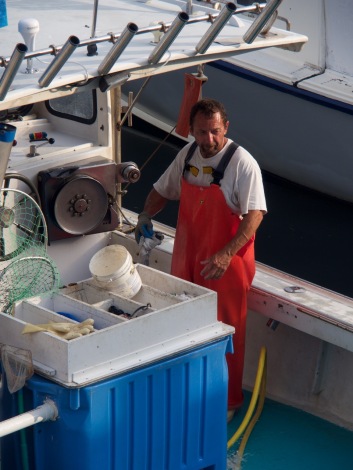 At every turn, one is reminded how important fishing is to the livelihood of this New England town.   It must be in the blood as many of the fishermen are descendants of  Portuguese and Italian immigrants who came  more than 100 years ago seeking work in a flourishing fishing industry.

Following a peaceful night at the marina, our plan was to head back to Maine waters, however, the weather gods had other plans.  Small craft warnings were out so we stayed in place until mid afternoon the second day when the hubby deemed it time to move on.

I’ll spare you the details, but suffice it to say I’ve never been so uncomfortable on the water.  The Annisquam River is very shallow and in the face of gusting winds, our boat was tossed about as if it were a bathtub vessel.  I would gladly have given up my on board place to be on the commuter train passing overhead.  Getting out of the river into deeper water was more than a welcome relief to say the least.

There was an unexpected bonus to having been delayed by small craft warnings, and you’ll have to come back to learn more about that.

19 thoughts on “Next Stop: Gloucester”