As one friend says, Maine has the cutest little towns, and one of my favorites is Wiscassett about 40 minutes down the coast from Rockport.

Like in other small Maine towns, most of the shops are situated along the main street .While this makes it convenient to stop, traffic is often backed up for blocks during peak traffic hours thanks to pedestrians crossing the street at either end of the shopping area.

The big attraction in Wiscassett is Red’s Eats, probably the most written about lobster shack in Maine. 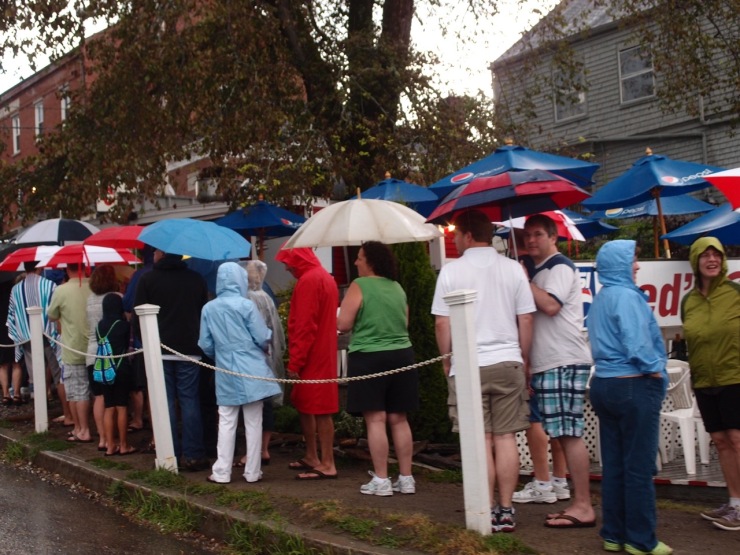 From mid-April until mid-October there is always a line no matter the weather.  That goes to show the result of publicity!

I have to confess I’m not much for long lines so I go  across the street where the food is as tasty and the service much faster.  One thing you learn when you spend a lot of time in Maine is to avoid the tourist stops during the summer months.

One of my favorite shops anywhere is in Wiscassett.  Rock Paper Scissors has an incredible selection of paper goods as well as great items for children, adults and home.  For sure, I allow plenty of time for browsing here.

New on the scene this year are two home accessory shops, Birch and Moulinette, both of which I found to have well chosen and irresistible merchandise some of which found its way into my shopping bag.

Birch features many accessories perfect for Maine decor and furniture that would work in a variety of styles.

As it card says, Moulinette is full of joyful things, and I found that to be very true.

No visit to Wiscassett is complete without a stop at Treats and that’s just what you will find there.  This day my favorite ginger cookie was missing, but there were plenty of other tasty edibles.

In addition to the shops right on the main street, there are a number of antique shops, but that requires another visit as it’s getting late in the day.  Until then, thanks for coming as the departing sign at Birch reads.

Leave a Reply to the Painted Apron Cancel reply