Now that we have rested a bit, let’s continue on.  If you have read Ken Follett’s Pillars of the Earth, you will enjoy this visit to Mont-St-Michel as it brings to mind the cathedral in that book.   It is a place heavy with spirituality and full of history.

Mont. St Michelle, its spire reaching to the sky, sits majestically high atop a hill on a rocky island just off the coast of France.

To get to the top requires walking many steps, so take a deep breath and let’s go.

The abbey’s fascinating history dates back to the eighth century. Structurally, it is layer upon layer of halls and chapels built over the centuries and each addition indicates art and technique at the forefront of its time.

It is easy to see how architectural elements changed over the centuries as work continued. 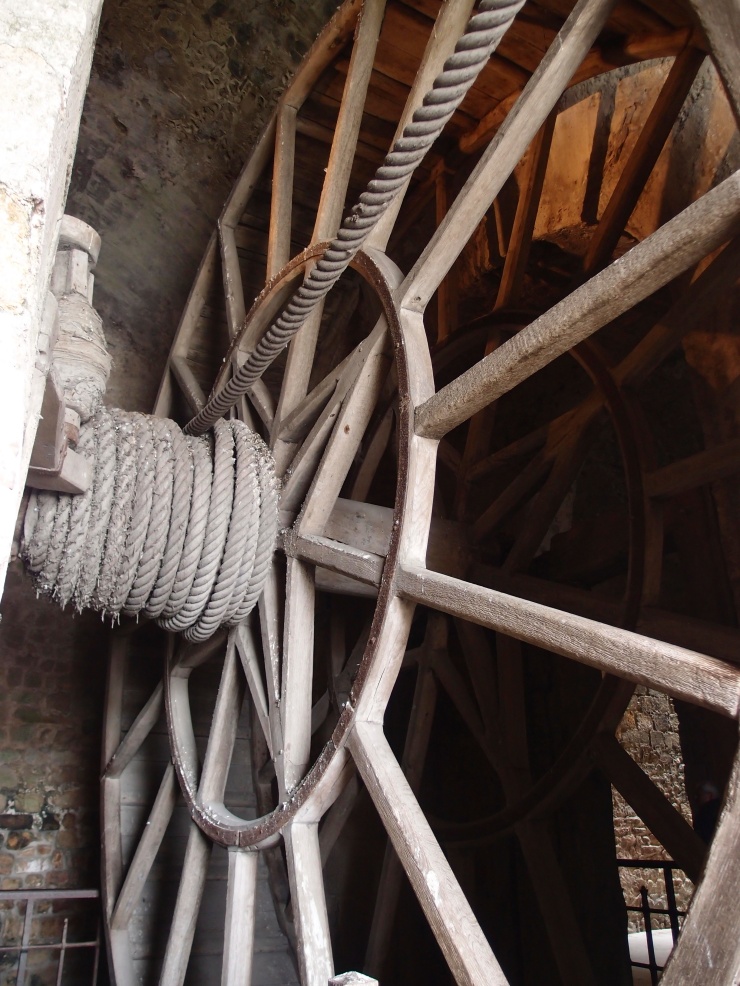 Fascinating is how the construction was done.  See this wheel?  It was used to hoist large, heavy blocks of limestone.

As in Follett’s book, men turned it by walking the interior space.  Think of a hamster going round and round on its wheel and you have the image.  You have to be amazed by the procedures used to build magnificent structures that have endured through the centuries.

Starting from the top down, it is easy to trace the sequence of Mont-St-Michel’s development.  At the higher elevations, the structure is more refined while the lower level with its massive columns  serves as sturdy support for centuries of change.

From its beginnings Mont-St-Michel has been a Benedictine abbey though today it is inhabited by only eight monks.  Were it not for the thousands of visitors who come, it would be a lonely place.

At the base of the abbey is a small town, quite charming and with an abundance of places to eat and shop, that is if you have the energy after exploring Mont-St-Michel for several hours.

Thank you for traveling along.  I hope you enjoyed the journey.  It is shared at Pink Saturday and Seasonal Sundays.